Following the much publicised launch in late October 2012, sales of the new Microsoft Windows 8 Operating System have been steadily rising, with more and more people opting to buy tablets instead of PCs’ or laptops.

Apple have an embedded Operating System iOS for the iPad and Google have used the Android OS for the Nexus and now Microsoft have introduced Windows 8 RT, their first operating system designed for the touch screen tablet market. With Windows 8 RT, what you see is what you get; a stripped down version of the full Windows 8. Additional features must be downloaded from the available apps in the Microsoft Store in much the same way as the iPad requires you to download apps from the Apple Store. Some apps are free, others are commercial and cost a few £s.

The fully installable and configurable version of Windows 8 is designed for installation on a PC or laptop, but still feels as though it needs a touch screen to unlock its potential, rather than a standard mouse and keyboard.

The start button has always been the first place users go to find applications, documents and other commonly used features, but in Windows 8 this has been replaced with a more interactive home screen much like the iPad, which includes tiles that can be modified and arranged to add a personal touch. 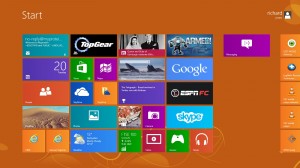 As with all major changes, the tiles take a little getting used to, but clicking in the top left corner of the screen (or swiping if you have a touch screen) allows the user to get back to the more familiar territory of the desktop.

Similar to the iPad and iPhone, open programs are not automatically closed with a click of the X in the top right corner. Instead they are minimised and left running, which makes for quick re-opening and retrieval times, but the downside is that each open document or application takes up a few extra system resources and it soon becomes easy to lose track of what has been left open in the system.

As of now, it’s difficult to see what Windows 8 running on a standard desktop / non-touch screen device brings to the party, however on a positive note, there is a big improvement in the speed and stability of the operating system over previous versions of Windows.

Enter the “hybrid” with the likes of the Lenovo Yoga & the Asus Tiachi. These fully loaded ultra books don’t just bring the drinks; they bring the music, the food and the DJ to the party.

Fully kited out with the latest hardware specs, the new ultra book convertibles not only offer a high speed, light weight fully functioning laptop for when only a keyboard will do, but also double up as a tablet for the diehard screen swipers.

Convertible ultra books are the perfect home for Microsoft Windows 8, with a fully loaded Windows 8 operating system and the ability to attach peripherals when necessary, but also the ease and functionality of the touch screen alternative.

The emergence of the hybrid ultrabooks and Windows 8 are indicative of the direction in which the computer industry is heading and the speed that technology and hardware are evolving, it seems that this is just the beginning.

If you need help or advice on any hardware or software issues or just wish to discuss the various Windows 8 options available then please don’t hesitate to contact a member of our team by email, – support@tabcomputers.co.uk, by phone – 01332 929421 or by filling in our Contact form Here

This entry was posted in General, Latest news. Bookmark the permalink.